Some of the largest Bulgarian networks and NGOs – the members of one of the two Bulgarian coalitions, supported by Civitates, initiated and produced the shooting of a documentary. This is a story about the activity of several Bulgarian citizen organizations during the emergency situation declared by the Bulgarian government in the spring of 2020 as a response to the COVID-19 outbreak. 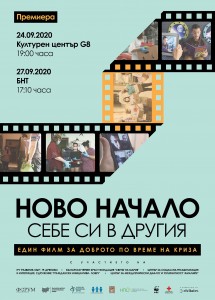 “A New Beginning – See Yourself In Someone Else” presents the everyday life, the emotions and the experiences of five of the hundreds of non-for-profit organizations and people in Bulgaria who devoted their lives and professional careers to making good. They were on the frontline since the beginning of the COVID-19 crisis, and especially during the first of now numerous periods of “lockdown”.

„We are that type of society that is still learning how to give, and how to see itself in the other. The personal example is an extremely important component of this process because it helps building the collective public behavior. We believe that through this movie we will be able to communicate the role of CSO’s in the building of a more conscious society – in the most direct and human way and, thus, to send our messages to a wider range of people”, Iva Taralezhkova, Chairperson of the Citizen Participation Forum.

The documentary was first presented on a live event in September 2020 followed by several local premiers in three different Bulgarian cities, in front of high school students, local communities and fellow CSO’s.

“The film depicts the work of organizations that would otherwise remain hidden from the public; it gives us faith that good people do exist and it raises our hope that in difficult times, there will always be someone who will help those in need”, said one of the spectators in Veliko Tarnovo, the hometown of “Center AMALIPE” – an organization working with Roma people and one of the main characters in the movie.

The movie was translated in English and is available for watching online and free, with English subtitles on YouTube here.