The Danube Europe and Citizen Participation

The Citizen Participation Forum hosted the Fifth Danube Participation Day on 17th October, organised together with Foster Europe and the Danube Civil Society Forum. The keynote address delivered by Mr Tony Nikolov, framed the debate about the responsibility of us as citizens along the Danube, who can bring change and build connections. 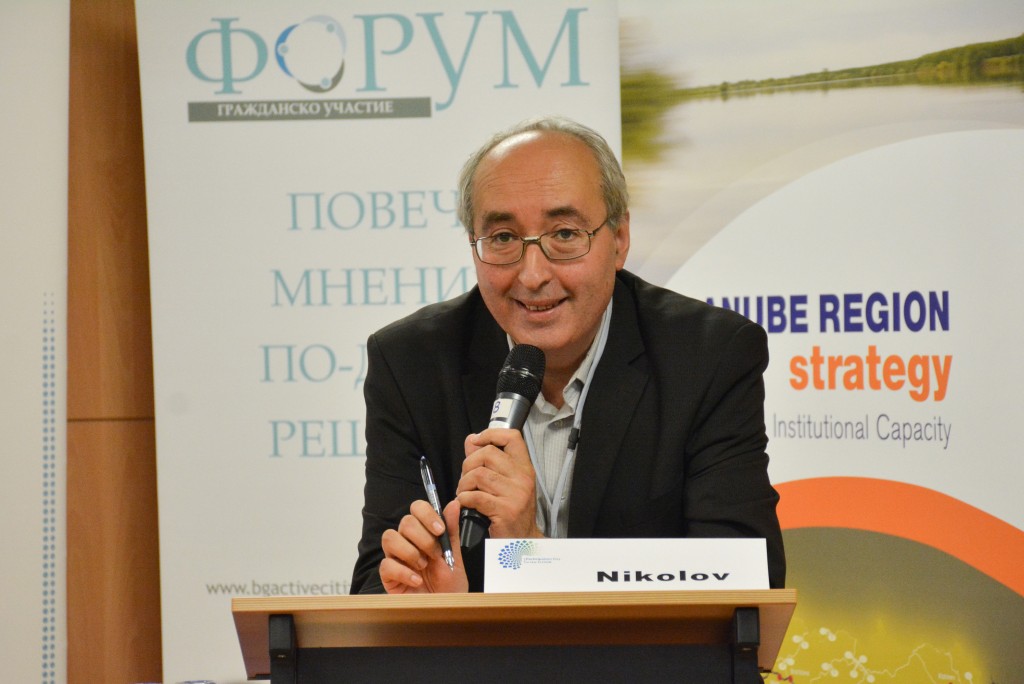 In the pages  narrating his childhood, the writer, Nobel prize winner Elias Canetti, mentions several times how the big river, the Danube, connects. The memory dates back to around 1910, approximately 100 years ago, which makes it even more valuable. Canetti’s Ruschuk, as Ruse was known then, is a colourful city: Bulgarians, Turks, Romanians, Armenians, Jews, all kinds of minorities, as well as foreign capitals and banks – Austrian, German, Romanian. Foreign consuls, a melange of languages.

Elias Canetti’s father trades with grain; the city is full of life, because the Big River “connects” people – not only economically, but ethnically. It connects during spring and in autumn. In the summer navigation along the river is more difficult; it connects also during the winter when the river freezes – communication takes place over the iced river from Bulgaria to Romania and back. For joy or fear, the Bulgarian girl, the maid in the writer’s family, tells stories for terrifying wolves coming from the Carpathian mountains, rushing over the iced river. I presume that on the Romanian bank similar legends were told about the frozen Danube that would be interesting to learn.

However, this is not the reason why I commenced these introductory notes with the memories of Cannetti on the occasion of the Danube day and the citizen participation.

Another reference from the memoirs of OUR nobel prize winner, as we are used to call him in Bulgaria, has captured my imagination: “It is along the Danube that people continuously go to Europe and return from Europe”. Ruse, of course, is part of Europe. As well as the other Danube cities – Vidin, Svishtov, Silistra.

This is exactly how they used to call it then and a bit later as well – “going to Europe, coming from Europe” – in Bulgarian or Romanian, cited in Canetti’s book in German or French.

It is worth considering this in another way, beyond the territorial borders. The Big River infuses Europe into itself through participation and partnership – from its springs to the delta.

Through this co-participation the people around the Danube become European. The river has united them, connecting all these regions that today reach up to 28, I think. The river flow has integrated, not desintegrated. Bringing together, not rejecting.

In another age, other times, which most of us in this hall remember, it happened in another way. Finding oneself at the banks of the Danube, at one and the same river, we felt as though Vienna is as far as the South or the North pole. The river turned into a barrier, not just frontier. This is how it was during the time of the Iron Curtain, that divided the continent in two.

Time can also withdraw like a river, pull away or move back westwards and then rush again eastwards.

In our days when populisms and nationalisms are in a spike, when dark clouds hang over Europe, it is necessary to reconsider all this – the disunity among people. To think about the fact, that the River that connects us, demands participation, presupposes bridges. We do have two bridges already along the border with Romania. It is high time we thought for a third one.

We should not think only about infrastructure, however. In a day like this, it is good to think about the people, for what we could achieve together, if we give each other a hand.

It is good to ponder for a while over another paradox. Usually, nowadays, the North and the West are symbols of progress, whereas concerns and worries relate to the development of the South and the East.

In Bulgaria, this takes a reverse path. When we talk about the Northwest, it sounds sorrowful. Northwest Bulgaria, part of that Danube Bulgaria, described by the Nobel prize winner Elias Canetti, part of the core of the European, is now to a large extent, a symbol of the feeling of abandonment and poverty.

Why is it like that? Why years ago it was seen as advancement, as European, while today it is far from that?

I do not have a geographical argument. There is no logic that geography has changed. People however seem to have changed. A certain “shrinking” has taken place. The citizens have stopped to see these perspectives that generations before, long ago, have envisaged and realised.

Interrupted and hard to reinstate are a number of natural linkages in the region. It was always important for a city like Ruse to maintain its connection with a city like Bucharest. The geographical distance is 60 km on the map. But what is the distance between the citizens of the two cities, between those who could build the real connections, the mutual projects, who hold significance for the future?

Bulgaria is not an island. Romania, Serbia, Austria, Germany and the other countries along the Danube are not islands either.

In the dream of an island, something global can be relived, something of the unfulfilled longing for the sea infinite; of the historical burdens to border only with ourselves, sunk in the boundlessness of history like an ocean, but also hidden into it… The possibility of an island is a permanent anti utopia (for more reference, see the postapocalyptic novel “The possibility of an Island” by Michel Houellebecq). Imagine just for a second what it would be if we did inhabit an island?

These are reflected in our attitudes, as well as in our belongings. Which is nothing new. The connections and the oppositions between land and water are analysed/researched since Herodotus and Thucydides, through Giambattista Vico, John Locke and Theodor Mommsen.

But we are not an island. The pre-global order is always territorial. The global – part of the ocean of new digital realities. But behind all these are the citizens – the ones who take action, navigate the processes.

We are all citizens. Which means people of participation. People carrying change. People tearing down the borders. Europe represents exactly this effort in times when new borders and limits are built.

As I started with a historical reference, I will conclude with another one. With the story of postcards with the Danube seal, which are diligently searched before my eyes by fervent collectors. As you well know, there are people collecting postcards with cities; others – with flowers; third – with historical personalities and what not. There are others who collect postcards from the Danube cities, buy them online from other Danube countries.

But the most precious ones, collectors told me, are the ones from the Danube Post. These are postcards from the beginning of the ХХ century in circulation up to the beginning of the WWII. The post, transporting sacks along the Danube, were sealed with a special stamp, placed only in the middle of the Big river – neither Bulgarian, nor Romanian, nor Serbian, nor Austrian. The stamp was of the Danube and today the collectors are dying to find such postcards.

Do take it as a memory from the today meeting, that this was the stamp of the common participation. The disappearance has opened the door to big and common troubles.

Let us not forget about this, today, when on the day of the Danube, we discuss citizen participation.

Because participation is also a responsibility.